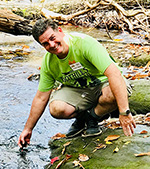 Andrew was born and raised in Anderson, SC, and graduated from Crescent High School in 1987. He served in the US Navy for 4 years as an Aviation Structural Mechanic, working on F-14’s on 4 different aircraft carriers. Andrew received a BS degree in Business Management from Limestone College in 2012, and is employed by the SC Department of Education as a Program Coordinator, and the Supervisor of the Pickens and Oconee County bus maintenance shops. Andrew and his wife, Willa, live in Easley and have three children. After joining the FTC in September, 2016, he thru-hiked the Foothills Trail. He is the Trail Captain for the Big Bend Trail.

Becky has been on the FTC Board for 6 years.  Originally from California, then relocating to North Carolina with her family and then moving farther south to the Upstate of South Carolina 14 years ago. She studied Parks, Recreation and Tourism at UNC-Greensboro, graduating in 2002. She is the Executive Director of the Reserve at Lake Keowee Community & Charitable Foundation.  Becky enjoys being outside every chance she gets. Her favorite hobbies include hiking, wakeboarding, boating and working on the farm with the cows, chickens and her donkey.  Becky and her husband Matt live in Sunset, SC

Born in Charlotte, NC Bill has a BS from UNC Chapel Hill, an MS from the University of New Orleans, and a PhD from the University of Massachusetts, all in Geology.  He has taught Geology and Environmental Science at Furman University since 1979 where he continues to actively research the southern Appalachian Mountains and promote sustainability.  He is an avid hiker, backpacker, gardener, and canoer.  He and his wife, Allison, live north of Pickens and have three grown daughters.

Born in Belton, SC, Rocky holds a B.S. in Biology from Furman University, an M.Ed. in Natural Science Education from Converse College, and a Ph.D. in Zoology from Clemson University. He is currently Associate Professor of Biology at Anderson University in Anderson, SC. In addition to academic interests and outdoor pursuits, Rocky participates in the Jocassee Gorges Research and Education Working Group through the SC Department of Natural Resources. He and his wife, Karon, live in Seneca with their three children.

Jean Arden lived in northwestern NJ before moving to the Greenville area in 2003. Jean was an early elementary educator for 32 years and has a B.S. and M.S. in Education and a M.A. in Environmental Studies. Jean served as an educator at the Audubon Youth Ecology Camps in Maine and Wyoming and was a summer trail and hut volunteer with the AMC in the White Mts. in NH. Presently she is a volunteer for the Discover Carolina program at Paris Mt. and a MN trail maintenance team member at Jones Gap State Park. Jean became an Upstate Master Naturalist in 2013 and a SC State Master Naturalist in 2015 and served as UMNA treasurer for 2015-16. In May of 2016 Jean received the Peregrine Award for hiking the Foothills Trail.

Tricia Kyzer is a naturalist, writer and environmental educator. She has a BA in Elementary Education from North Greenville University and holds a Statewide Master Naturalist Certification as well as a Palmetto Environmental Educator Certification. For the past 15 years Tricia has worked with people of all ages leading them into making their own connections to our wild places. She has helped develop educational curriculums for Lake Conestee Nature Preserve and Jocassee Lake Tours. Tricia has thru hiked the Foothills Trail several times, earning the Peregrine Award in 2018. She appreciates the never ending wonder of the natural world and enjoys spending time outdoors being curious and making new discoveries.

Greg has worked for the S.C. Department of Natural Resources for 27 years in outreach and conservation education. He instructs a Jocassee Gorges class with the Osher Lifelong Learning Institute at Clemson University and is DNR’s coordinator for the Upstate Master Naturalist Program. He is married to the former Angela Smith of Greenville, has three sons and a daughter and is a member of Easley Presbyterian Church.

Scott was born and raised on a farm in Minnesota and received a biology degree at Northwestern College in Iowa.  He held a seasonal naturalist position at an outdoor education camp for four years in California before moving to South Carolina in 1989 to accept the job as Interpretive Ranger at Table Rock State Park.  It was a great fit for him being an avid hiker and birder as well as raising 3 sons with his wife Christine.  Scott has been on the FTC board since 2005.

I was born and raised in Cincinnati Ohio. I have a BA in Sociology from the University of Cincinnati and an MS in Outdoor Recreation with a focus on Interpretation and Education from Indiana University. I started my career working as a Park Ranger for NC State Parks at Jordan Lake State Recreation Area in 2007. Through my 14-year career, I’ve also worked at Goose Creek, Gorges (2011-2013) and Lake James State Parks as a Park Ranger. I took my first Superintendent position at Mount Mitchell and came back to Gorges in May of 2021 from Grandfather Mountain State Park. While I’m not from Transylvania County, I feel at home here, and am very happy to be back at NC State Parks’ best Park. I enjoy hiking, waterfalling, fishing, skiing, kayaking, wood working and photography when I’m not at work. My favorite aspect of being back is working in a temperate rainforest and educating the public on all the amazing flora and fauna that correlates with the local environment.

Joel is the son of career missionaries born in Rio de Janeiro, Brazil. Upon completing high school Joel moved to Virginia and graduated from Virginia Commonwealth University in 1985 with a B.S. in Information Systems while working for UPS. In 2001 he and his family moved to the Greenville SC area where he obtained an associates degree in Network Administration at ECPI. He worked for Greenville Water as a network engineer for 14 years and is currently working for Anderson University in their I.T. department. Joel started volunteering on the FHT, became a member of the conservancy, and has been a regular on the organized trail maintenance outings since 2018. Joel enjoys the outdoors, nature, hiking, trail maintenance and watching soccer. He is blessed to have Sharon as his wife and two grown children. 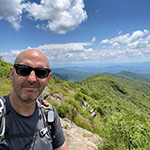 Jerry is a native of Arizona, and moved to Spartanburg, SC with his wife, Lisa in 1998. He served for 5 years as a US Nuclear Naval Officer aboard the USS Texas and USS Enterprise. He graduated from the US Naval Academy, and he has a Masters in Ocean and Coastal Engineering from Texas A&M. He has worked in IT for MetLife for the past 24 years, and he is currently an Enterprise Software Architect supporting global projects. Jerry is an avid hiker and backpacker, and he is an active member of the outdoor community. He recently finished a three year term as the president of the Greenville Natural History Associated (GNHA), which is the largest hiking club in the Upstate SC. 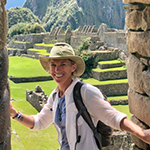 Kerry McKenzie has been working in education for over 20 years. She holds a M.S. in Physical Education, Early Childhood Development and Health Education from West Virginia University and B.A. in Psychology from Wheeling Jesuit University. Kerry was a clinical instructor in the Physical Education Department at West Virginia University for several years where she instructed future teachers in physical education and early childhood motor development. She decided to move south in 2007 for a unique position as the director and creator of a childhood obesity prevention program at Prisma Health System Children’s Hospital, Kerry dedicated her time helping children, parents and teachers lead healthy lifestyles through a program she called Farm to Belly from 2008 – 2020. Kerry currently works for Jocassee Lake Tours as a naturalist guide and kayak instructor and is the director of Jocassee Wild Child Outdoor Education.  Kerry also has her own business called Whole Again Wellness where she teaches yoga, mindfulness, leads retreats and is a health coach.  She resides in Pickens with her husband David and 2 dogs on a large property which offers much opportunity to explore the wonders of the natural world.

Bobbie graduated from UNC Pembroke and moved to the Upstate in 1971. She received her master’s degree from Western Carolina University in guidance and counseling. After 17 years as a math teacher, Bobbie took on the role of guidance counselor at Walhalla High School. Now retired, she has participated in the Upstate Master Naturalist training and works with UMNA projects. She and her husband, Bo, live in Walhalla, where she is a member of St. Luke United Methodist Church and Walhalla Woman’s Club. They have a son and daughter-in-law.

Originally from Indiana, Cathy graduated from Indiana University with a B.S. in geology and from the University of South Florida with a M.S. in hydrogeology. She worked for an environmental consulting firm in Tampa, FL and Oak Ridge, TN for 15 years before moving to SC. Cathy is currently pursuing a Masters in Environmental Education at Montreat College and helps with the Discover Carolina program at Table Rock State Park and with the Clemson Extension 4-H Jr. Naturalist program. She is involved with many conservation organizations including the Master Naturalists, Native Plant Society, Friends of Jocassee, and Lake Hartwell Association. Cathy loves to hike and backpack and is a Leave No Trace Master Educator. She and her husband live in Anderson and have three daughters. 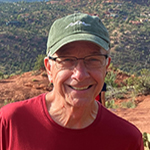 Bruce is from Urbana, Ohio and is retired from 40 years in city government with careers in law enforcement and public administration.  He has a Master of Public Administration degree from the University of Dayton.  With his wife Deanna, they learned to appreciate nature by camping with their 4 kids at many state parks and a few national parks and attending many nature programs.  In 2011, Bruce & Deanna bought a log cabin in the woods in Sunset, SC which is now home.  Enjoying DIY projects, fellowship and a nice workout, Bruce naturally took a liking to the maintenance hikes with Heyward and Andrew and many others and he looks forward to many more. 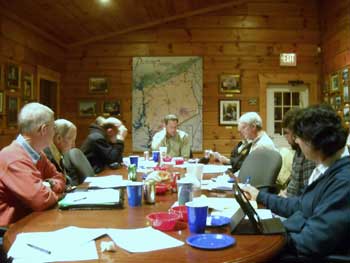