Foothills Trail Family Hike Sat. March 28, 2015 from Whitewater Falls to Bad Creek
We had a wintry start to this early spring hike. We all gathered in the Upper Whitewater Falls parking lot under clear blue, but cool skies. The rhododendron around the parking lot were drooping and rolled in the less than 32 degree temperatures. With shuttle arrangements made, a brief introduction and explanation followed to clarify that this was not the FTC Wild Flower Hike (which is in about two weeks), but some early blooming species should be seen on this hike. With this said, 20 hardy souls were off.
Walking up to the first overlook of the 411-foot high Upper Whitewater Falls is a 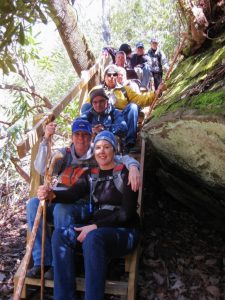 lways an impressive experience, no matter how many times I make this hike. Along with this expanse of natural beauty are two grim reminders of the foolishness of people venturing too close to the top or climbing on the falls – an old sign understating the number of people killed on the falls (now risen to 18 or more) and a large steel post anchored into the hillside above the overlook. This pole, and another one just like it at the base of the falls, supports a cable system that North Caroline Rescue Squads string up to hoist the injured or dead persons who fail to heed the warnings. Rerouting of the Foothills Trail and adding barriers discouraging access has only slowed but not stopped the deaths.
Two species of rhododendron grow along the steps that descend to the lower viewing platform – Rhododendron maximum and minus – both species were full of buds and should be in bloom in late May and June. This overlook is a good place to view healthy Hemlocks trees; both here and the Coon Branch area downstream are two test areas in the war on the Woolly Adelgid. This site is special due to having both the Carolina and Eastern Hemlock side by side.
After a couple of group photos, with the falls in the background, we were ready for the real hike. Trailing Arbutus was growing along the upper bank to the trail, but not a bloom of its small white flower was to be found. Next, the early Toadshades Trillium (sessile flowers) with its mottled leaves were in the thousands covering the mountainside, but not a single bud was open. As we continued our 600-foot descent to the river, we found a few of the (stalked flower) trillium had come up, but no open buds. Note: With the mountainside covered in trillium, all with buds, the April Wild Flower hike should be a great success. We were not totally shut out from the wildflowers; violets were in full bloom. The Yellow Woodland species and the Halberdleaf Yellow and Common Blue were evident the total length of the trail.
Partridgeberry was found all along the trail. Its red berries are edible but not very tasty. Christmas Ferns were in the process of replacing fronds with new fiddleheads rising from the clusters. The False Hellebores and Mayapples were just popping out of the ground along the lower section near the river.
After about an hour descent, just above the river, a call for lunch was made. We all spread out on the large boulders along the river avoiding the shade and seeking any warmth from the sun. If you can’t enjoy this view of nature on display, then you will never enjoy nature; just go back inside.
After a climb up the car size boulders to the steel bridge crossing the river, we shortly arrived at the second waterfall. Corbin Creek is a beautiful and impressive waterfall by itself, but being in the shadow and roar of Upper Whitewater, it goes almost unnoticed by most hikers. If located by itself, it would be a well-known and popular falls instead of being regulated to obscurity.
This north side of the river trail has its own natural beauty with several species of Hexastylis and ferns. It has lost much of its high canopy due to the Woolly Adelgid infestation. This being an untreated area, it is typical of most mountain groves, there being no practical way to treat a large forest.
After walking through a rhododendron thicket, we crossed the new bridges and steps that were replaced by the Forest Service and Foothills Trail Conference over the fall and winter. A big thanks goes to a lot of FTC members for their hours of work hauling in the material and building the replacements. With the rain of the last few months, a Resurrection Fern is thriving on a large white oak blowdown along the trail.
As we approached the lower bridge crossing the Whitewater River, something new has been added – a beautiful bench beside the river along with two plaques dedicated to long-term employees of Duke Energy and DNR who worked to study and protect this wonderful natural resource. As we exited the trail toward Bad Creek, an aroma of Sweet Pinesap could be detected along the trail indicating its presence, but we could not locate its brownish purple stems.
We arrived at the Bad Creek parking lot just before 3 o’clock. The temperature rose a little more than predicted, and the day turned out to be a perfect one for a hike.